A crowd of 5,000 packed the dock in Seattle as the Klondikers emerged from the ship. “Show us the gold!” rose the chant. The miners obliged, raising their sacks to rowdy cheers. Streets were so thick with people, streetcars couldn’t budge. Drivers were quitting anyway, like working men around the Northwest. Even Seattle’s mayor walked off the job, bound for the gold country. The prospectors’ rags-to-riches stories resonated deeply in a region reeling from the 1890s depression. Jobless men were camping on beaches, living off clams and whatever they could scavenge. Like them, the miners were scruffy and weather-beaten, many thin and malnourished. But those leaving the ship had found a way out of poverty. Now their toughest challenge was lifting their suitcases stuffed with gold. Bearing the heaviest load of all was Clarence Berry, who’d left Selma, California, nearly penniless. This was his triumphant return, and soon his name would be everywhere.

West of the West
Dreamers, Believers, Builders, And Killers In The Golden State

Teddy Roosevelt once exclaimed, “When I am in California, I am not in the West. I am west of the West,” and in this book, Mark Arax spends four years travelling up and down the Golden State to explore its singular place in the world. This is California beyond the clichés. This is California as only a native son, deep in the dust, could draw it. Compelling, lyrical and ominous, his collection finds a different drama rising out of each confounding landscape. Arax combines journalism, essay and memoir to capture social upheaval as well as the sense of being rooted in a community. Piece by piece, the stories become a whole, a stunning panorama of California, and America, in a new century.

In My Father’s Name

The true story of the author’s return to his Central California hometown to investigate his father’s unsolved 1972 murder. “Almost every American town harbors some brutal secret, but few produce writers like Mark Arax with both the courage and artistic talent needed to coax the story out and shape it into fine literature,” says Peter H. King of the Los Angeles Times. “Of course, Arax had an extra incentive: the footsteps he followed ran straight through his own family, straight through his own heart.”

The King of California:
JG Boswell and the Making of A Secret American Empire 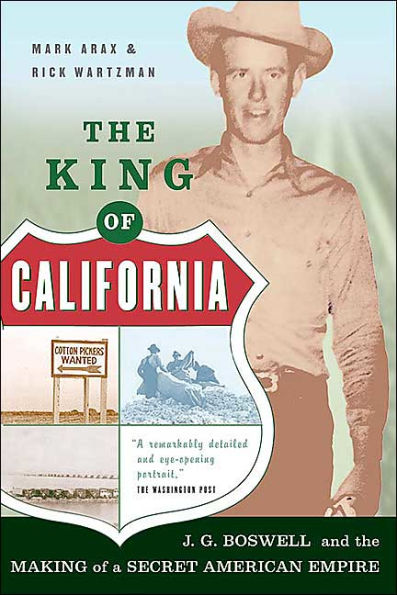 The King of California is a rich, colorful history of California centering on the untold story of America ‘s biggest farmer, J.G. Boswell, who controls more than $1 billion worth of water rights and real estate in the heart of the state.

Over the past fifty years, Boswell has built a secret empire while thumbing his nose at nature, politicians, labor unions and every journalist who ever tried to lift the veil on the ultimate “factory in the fields.” Now eighty years old, with an almost pathological bent toward privacy, Boswell has spent the past few years confiding one of the great stories of the American West to Mark Arax and Rick Wartzman. The King of California is the previously untold account of how a Georgia slave-owning family migrated to California in the early 1920s, drained one of America ‘s biggest lakes in an act of incredible hubris and carved out the richest cotton empire in the world. Indeed, the sophistication of Boswell ‘s agricultural operation–from lab to field to gin–is unrivaled anywhere.

Much more than a business story, this is a sweeping social history that details the saga of cotton growers who were chased from the South by the boll weevil and brought their black farmhands to California. It is a gripping read with cameos by a cast of famous characters, from Cecil B. DeMille to Cesar Chavez.